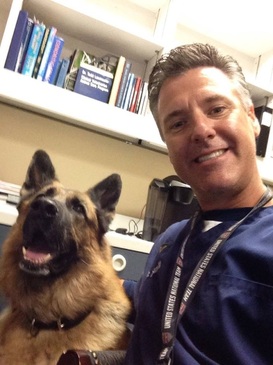 Dr. Todd Lawmaster first developed his passion for diagnostic imaging, and in particular ultrasonography, over 30 years ago while working as a veterinary technician in Southern California.  While putting himself through college to earn his bachelor’s degree in zoology, Todd had the invaluable opportunity of regularly assisting a mobile veterinary ultrasonographer as well as working at All-Care Animal Referral Center, one of the largest veterinary specialty referral centers in Southern California, where he met one of his most influential mentors, Dr. Barbara Kitchell, an internationally recognized veterinary oncologist and professor.  While working at ACARC with Dr. Kitchell and numerous other veterinary specialists, Todd quickly expanded his knowledge base and his passion for diagnostic imaging flourished, now with the perspective of how advantageous non-invasive ultrasonography was in diagnosing and managing oncology cases.

Upon completing his undergraduate studies at California State Polytechnic University, Todd was awarded a research assistantship in veterinary oncology from the University of Illinois Urbana–Champaign, School of Veterinary Medicine where he concurrently earned his doctorate in veterinary medicine while working in Dr. Kitchell’s laboratory which focused on various aspects of oncology such as evaluating predictive and prognostic biomarkers for chemotherapy response, exploring personalized medicine approaches using spontaneous canine tumors as a translational model system, and adapting human chemotherapeutics to companion animals with spontaneously arising malignancies.  In addition to fulfilling his research obligations, Todd continued to further his knowledge of diagnostic imaging and honed his ultrasonography skills during his senior year of veterinary school by taking an unprecedented number of elective radiology rotations.

After graduating with honors from the University of Illinois Urbana–Champaign, School of Veterinary Medicine in 1999, Todd moved back to California, but further north than his Southern California roots.  Within a few short years Todd purchased a struggling small animal veterinary hospital in Monterey and proceeded to convert it into a state-of-the art facility that quickly earned the highly sought-after American Animal Hospital Association’s Accreditation with Honors. It was within the walls of this small animal hospital that Todd routinely employed his knowledge and skills as an ultrasonographer to help manage various internal medicine cases.  In addition to working full-time at his small animal hospital, Todd also worked weekends at the local emergency hospital, provided mobile veterinary ultrasound services to fellow veterinarians throughout Monterey County, and taught occasional ultrasonography courses to other veterinarians across the country.

In 2006, Todd decided to sell his small animal practice to spend more quality time with his family and moved to Arizona to be near several of their siblings who had migrated from Southern California over the years.

Since moving to Arizona, Todd has continued to expand his mobile veterinary ultrasound service across the Greater Phoenix Metropolitan Area.  During this time he has also reunited with his passion for research when in 2009 he accepted a position as the clinical veterinarian at St. Joseph’s Hospital and Medical Center where he is involved with various research projects focusing on neurology, oncology, immunology, pharmacology, and cardiology.

In addition to his passion for family, diagnostic imaging, and research, Todd also indulges in his other passions… soccer and working with kids.